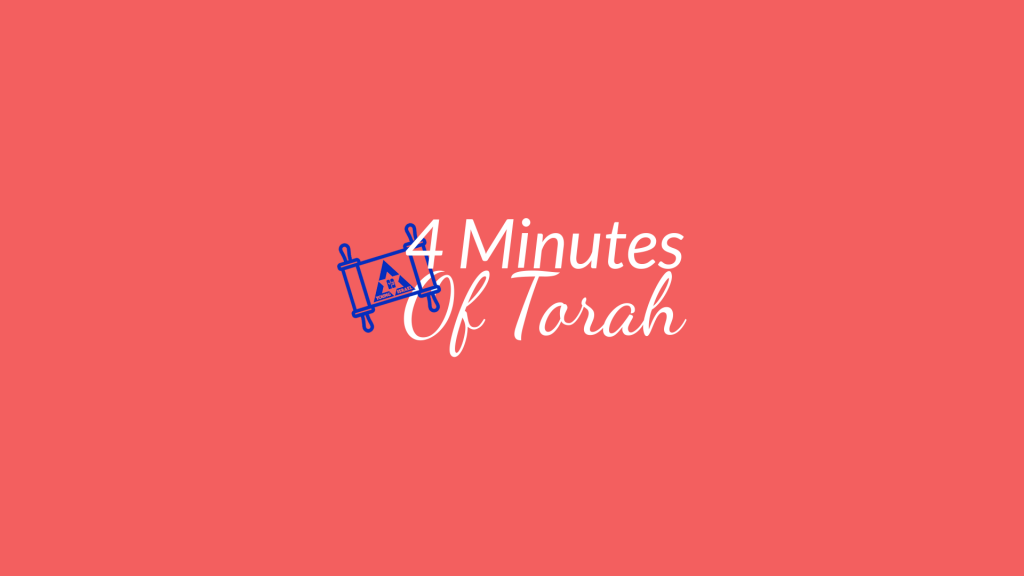 The National Council of Young Israel (NCYI) is proud to present a new series  called “4 Minutes of Torah.”

Each week, NCYI will share a Torah video from one of our branch Rabbanim with a short 4-minute thought on the Parsha/Inyanei D’yoma, we intend to reach over twenty-thousand Young Israelites to learn and enjoy.

Signup to receive “4 Minutes of Torah” each week!

Learn more about YI Brookline at: www.YIBrookline.comInterested in sponsoring a week of “4 Minutes of Torah”?
Email us: [email protected]

From the Young Israel Archives.

Parables of the Maggid- A Shavuot Message
Rabbi Moshe Greebel z”l
Past Associate Member, Young Israel Council of RabbisOne of the titles by which we refer to the Yom Tov of Shavuos is ‘Zman Matan Toraseinu,’ or the time of the giving of our Torah.  Yet, when Moshe Rabbeinu first ascended Sinai to receive the Torah, he was given somewhat of an inhospitable welcome, as we see from the Gemarah of Shabbos 88b:

“Rabbi Yehoshua Ben Levi also said, ‘When Moshe ascended on high, the hierarchy Malachim (celestial emissaries) spoke before HaKadosh Baruch Hu, “Sovereign of the Universe! What business has one born of woman amongst us?”” He has come to receive the Torah,” answered He to them.  Said they to Him, “That secret treasure (the Torah), which has been hidden by You for nine hundred and seventy-four generations before the world was created, You desire to give to flesh and blood? What is man, that You are mindful of him? And the son of man, that You consider him…?’” (Tehillim 8:5)

As per the Gemarah, HaKadosh Baruch Hu ordered Moshe to take firm hold of the Kisei HaKavod (throne of glory) for his protection against the fiery breath of the hierarchy Malachim, and answer their arguments against mankind being given the Torah, which he most successfully managed to do.

Now, whether Aggadah (homiletics) is to be taken literally or figuratively, a somewhat inevitable question confronts us regarding this particular Gemarah.  If the hierarchy Malachim were aware that HaKadosh Baruch Hu had already decided to present mankind with the Torah through Moshe, where did they get the ‘insolence’ to so vigorously protest the arrival of Moshe to receive the Torah?  Should not the hierarchy Malachim of all HaKadosh Baruch Hu’s servants, have served their Master with thorough loyalty, and not by casting aspersions?

Most fortunately for us, we are provided with quite an apt answer to our question by the Dubno Maggid (Rav Ya’akov Kranz 1740 – 1804) of blessed memory, with the following very ingenious Mashal (parable).

A famous Rabbinic scholar had served in a large city for many years. As can be imagined, he was involved in a great many issues pertaining to the Jews of that city. Day and night, he was consulted to give renditions of the Halacha (Torah Law), to settle disputes between litigants, to oversee charity drives, and to intercede with the secular government on behalf of the Jews of the municipality.  So faithfully did he toil at his post, that he never knew respite or relief from his labors.

The years all too quickly passed by, and the Rav grew old, too old to continue with these rigorous activities’ day in and day out. After careful deliberation with his wife and the rest of his family, it was decided that the Rav would seek employment in a smaller city.  There, he could live out the remainder of his life in quietude, avoiding the stress and pressure he had experienced thus far.  The Rav called for a town meeting.

“As you all know,” declared the Rav to those assembled, “I have labored hard on your behalf for many years, years which have taken their toll on me. Now that I have grown old in your service, it is impossible for me to continue in this manner any longer. My strength has ebbed from me. I must seek a less demanding existence. With your permission, I will apply for a Rabbinic post in a smaller city, one in which I will not be too heavily taxed with communal affairs.”

These words, as can be readily imagined, heavily saddened the audience.  After several unsuccessful attempts at changing the Rav’s resolve, the community had little choice but to reluctantly accept their leader’s decision.  After all, the Rav’s health was at stake.  This point was inarguable.

Several days later, the Rav dispatched a letter to a Jewish community in a smaller city, where at present, the post of Rabbi remained vacant.  The communication read:

“I have given notice to my community that for the sake of my health, I wish to relocate to your city.  If you accept me as your Rav, preparations for my departure from here can begin immediately.”

Needless to say, the community of this smaller city was overjoyed at these good tidings. So eminent a Rabbinic scholar wished to relocate to their city. A letter was dispatched by this community, which read:

“You do us undeserved honor by requesting to live among us as our Rabbi. Our entire community rejoices. We are prepared to send our most prominent representatives to your city to accompany you on your journey to our community. In addition, we have hired very costly  carriages and wagons, complete with drivers and footmen to transport you, your family, and your belongings. We eagerly await your arrival.”

Several days later, the carriages, wagons, and the representatives arrived in the city of the Rav. There however, in the town square, an angry rank and file, brandishing sticks and clubs, suddenly approached them.

“How dare you presume to take away our beloved Rav?” screamed the unruly mob.  “We will never allow you to remove him from us!”

Hearing these threatening words, the representatives, drivers, and footmen ran in terror.  The mob then began to thrash the carriages with their weapons.

Aghast, the Rav appeared in the town square.

“What is the meaning of this?” he angrily shouted.  “Have you not given me your permission to relocate?  Why are you acting in such a shameful manner?”

Hearing these words, the mob ceased their wild behavior, and stepped away from the carriages and wagons.  Apprehensively, the representatives and drivers came out of hiding, and fearfully ordered the footmen to begin loading the Rav’s belongings. When this was completed, the Rav and his family boarded their carriage, ready to depart from the city.

Nonetheless, before they were able to do so, the unruly mob assembled once more, approaching the carriages and wagons with their sticks and clubs.

“We are determined to bar your way!” they angrily shouted.  “You will not take our revered Rav from us, not while we live!”

Standing up in the carriage, the Rav admonished the crowd, saying, “What are you doing? Did you not give me your leave to relocate to another city?  By acting in so undisciplined a manner, you negate everything I have taught you! Desist from such behavior this instant!”

At this point, one member of the crowd declared, “Rabbi, will you give us a word in private before your departure?” Descending from the carriage, the Rav went with the mob to a location out of earshot of the public square.

“Rabbi,” declared the mob leader, “we mean the representatives of this other city no harm by our behavior. We only act so, for your own good. Perhaps, the community of the city to which you relocate will mistakenly assume that you leave us because we wish it so. In such circumstances, they will treat you with less respect than you deserve. Our aim is to show these representatives that you leave us of your own accord. Only then will they treat you with the distinction that you merit.”  And, so concludes the Mashal of the Maggid.

The hierarchy Malachim did not protest and threaten with their words and fire in order to harm Moshe, the Maggid taught.  Rather, they only wished to illustrate their reluctance to the giving of the Torah to flesh and blood, who they thought would only violate it. With this protest, the hierarchy Malachim displayed to Moshe that the B’nai Yisroel should not take the Torah HaK’dosha lightly and not deny it its deserved respect and honor.

The very essence of the celebration of ‘Zman Matan Toraseinu,’ is to come to the realization that only we, the people of Yisroel among all the other nations of the world, have been bestowed the greatest gift known to all humanity, the Torah. And, because we as a people, held fast to that Torah for so may thousands of years to the present day, we merit yet another Yom Tov of Shavuos to commemorate its giving.  For, the Mitzvos of the Torah HaK’dosha are our very lives and the longevity of our days.

May we soon see the G’ulah Sh’laimah in its complete resplendency- and in our times.  Chag Samayach, a good Yom Tov. Click here for Printer Friendly version.