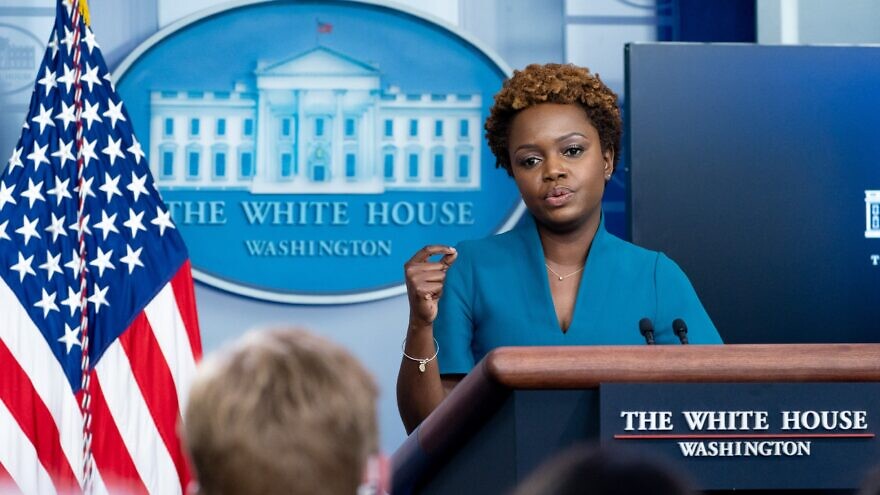 The National Council of Young Israel (NCYI) today expressed concern regarding positions pertaining to Israel expressed in the past by Karine Jean-Pierre, who was recently promoted by President Biden to be Assistant to the President and White House Press Secretary.

Jean-Pierre previously served as national spokesperson and senior adviser at MoveOn.org, an organization that strongly opposed the Israel Anti-Boycott Act, which is bipartisan federal legislation that targeted the Boycott, Divestment and Sanctions (BDS) movement. During her tenure, she wrote an opinion piece in Newsweek in which she harshly criticized AIPAC, a bipartisan organization that works to strengthen and promote the U.S.-Israel relationship, and urged people to boycott AIPAC’s annual policy conference. Referring to AIPAC, Jean-Pierre said that the group’s “severely racist, Islamophobic rhetoric has proven…alarming” and asserted that it “has become known for trafficking in anti-Muslim and anti-Arab rhetoric while lifting up Islamophobic voices and attitudes.” She also wrote that “Israel may have committed war crimes in its attacks on Gazan protesters.”

“Karine Jean-Pierre has a troubling track record when it comes to Israel and AIPAC, an organization that works tirelessly to further strengthen the U.S.-Israel relationship, and her elevation to a top White House post is indeed cause for concern. While President Biden is a lifelong supporter of the State of Israel and deeply values the unique bond that the United States shares with its sole democratic ally in the Middle East, we are concerned that Ms. Jean-Pierre’s previously expressed viewpoints regarding Israel may adversely impact how the Biden Administration communicates its policies pertaining to Israel. At a time of rising antisemitism and anti-Israel animus, it is critical that the White House’s public statements and sentiments do not reflect the personal beliefs that Ms. Jean-Pierre has expressed about Israel in the past. We certainly hope that Ms. Jean-Pierre chooses to back away from her past comments about Israel and AIPAC, and we urge the White House to take the necessary steps to ensure that Ms. Jean-Pierre’s opinions about Israel are not conflated in any way with official policies that emanate from the Biden Administration.”

For the past 110 years, the National Council of Young Israel has ably served the broader Jewish community. With more than 25,000 member families and approximately 135 branch synagogues throughout the United States, Canada, and Israel, the National Council of Young Israel is a multi-faceted organization that embraces Jewish communal needs and often takes a leading role in tackling the important issues that face the Jewish community in North America and Israel.