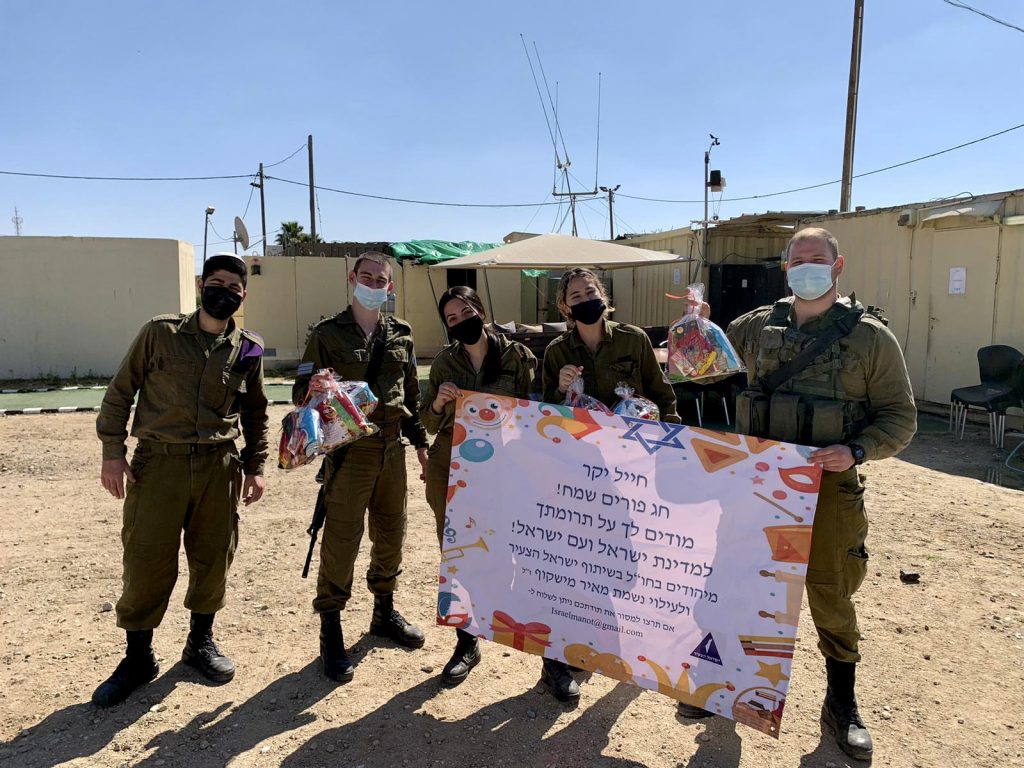 IDF soldiers throughout Israel had extra reason to smile on Purim after receiving Mishloach Manot packages through a program organized by American Friends of Yisrael Hatzair, in cooperation with the National Council of Young Israel (NCYI).

Despite immense challenges posed by Covid-19, approximately 2,000 Mishloach Manot packages were distributed to IDF soldiers on Purim day thanks to the tireless efforts of the Mishkoff family, who partnered with Lt. Colonel (res.) Rabbi Yedidya Atlas from the IDF Rabbinate and NCYI Director of Rabbinic Services Rabbi Binyamin Hammer. The program was made possible through the generous support and participation of nearly two dozen schools and synagogues across the United States.

The Mishloach Manot packages were delivered to soldiers from the Gaza Division in the south and the Judea-Samaria Division, as well as to other key combat units in central Israel and Naval units in the north. In addition, Matanot L’evyonim (Gifts for the Poor) were provided to nearly 100 needy soldiers and their families. Furthermore, Megillot Esther were made available, which enabled the IDF Rabbinate to perform Kriyat Megillah for every unit in Tzahal. 250 personal Mishloach Manot were also delivered to friends and family throughout Israel.

“All of these soldiers were serving and protecting Am Yisrael throughout Israel over the Purim weekend, thereby allowing everyone else to perform the four mitzvot of Purim in safety and joy,” said Helene Mishkoff, who is a member of the Young Israel of Jamaica Estates. “It is heartwarming to know that these Mishloach Manot packages brought such joy to our heroic IDF soldiers and infused their Purim with a greater degree of happiness.”

The Mishloach Manot program was started approximately 15 years ago by Meir Mishkoff, z”l, who had a tremendous love for the land of Israel, the people of Israel and especially the soldiers of Israel. Since the inception of the Mishloach Manot campaign, Meir, z”l, worked diligently to ensure that tens of thousands of IDF soldiers would be able to experience the true joy of Purim and to show them the constant support they have from Jews around the world. In light of Meir’s unexpected passing in 2017, the campaign has been and will continue to be dedicated in his memory to continue his legacy for many more years to come.

“Supporting the brave soldiers of the IDF and demonstrating to them that the American Jewish community is grateful for their incredible service to the State of Israel is a responsibility that we all share,” said NCYI President Rabbi David Warshaw. “We are so grateful to the Mishkoff family for their outstanding efforts and for spearheading this important initiative.”

For more information about the Mishloach Manot program for the IDF through the American Friends of Yisrael Hatzair, which is an affiliate of the NCYI, please email [email protected] or contact the NCYI. 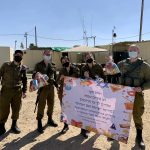 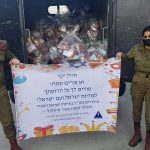