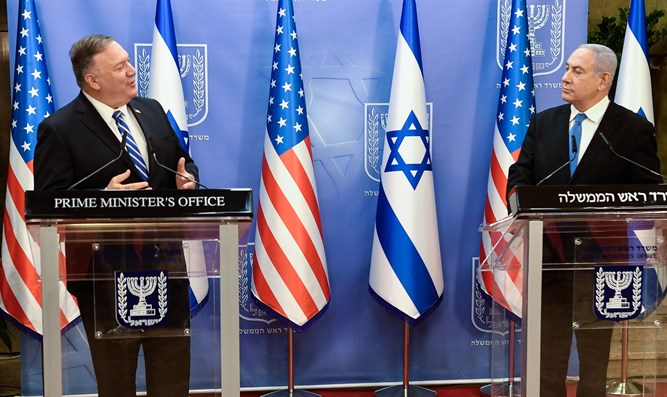 The National Council of Young Israel (NCYI) today strongly praised Secretary of State Mike Pompeo after he announced during a trip to Israel that the United States would classify the Boycott, Divestment, Sanctions (BDS) movement, which he called a “cancer,” as anti-Semitic and would “immediately take steps to identify organizations that engage in hateful BDS conduct and withdraw U.S. government support for such groups.”

The NCYI noted that the international working definition of anti-Semitism, which was adopted by the International Holocaust Remembrance Alliance in 2016 and is utilized by the U.S. State Department, includes various anti-Israel activities, such as those employed by BDS activists in their quest to delegitimize the State of Israel.

In addition, the NCYI commended Pompeo, who became the highest-ranking American diplomat to visit an Israeli town in Judea and Samaria, for announcing that products from Judea and Samaria can be duly labeled “Made in Israel.” In his remarks about the policy change, Pompeo said that, “The U.S. stands with Israel and will not tolerate any form of delegitimization.”

Last year, in a landmark announcement, Pompeo stated that the State Department does not deem Israeli towns in Judea and Samaria (otherwise known as the “West Bank”) to be in violation of international law.

During his visit to Israel, Pompeo also became the first U.S. Secretary of State to visit the Golan Heights. In March 2019, the State Department officially identified the Golan Heights as being “under Israeli control” and President Trump declared that the United States should recognize Israel’s sovereignty over the Golan Heights.

We applaud Secretary of State Pompeo for his forceful declaration regarding the anti-Semitic BDS movement, which unequivocally deems this discriminatory and dangerous effort a racist tactic that foments hatred against the Jewish community and engenders animosity towards the State of Israel. The United States is making it abundantly clear that supporting BDS, thereby advocating anti-Semitism, will have real ramifications and will not be tolerated.

Furthermore, we commend Secretary of State Pompeo for the decision to push back against the delegitimization of Judea and Samaria, which is home to hundreds of thousands of Israeli citizens. The area that comprises Judea and Samaria, which was returned to Israeli sovereignty in a defensive war after Jordan attacked Israel in 1967, is an integral part of Israel’s ancestral homeland and is home to many Jewish holy sites. The international community’s push to assail Israel for its claim of sovereignty over Judea and Samaria is a blatant attempt to denigrate the Jewish State, and we thank the Trump administration for its ongoing efforts to legitimize Israel’s inherent right to maintain control over these vital areas.

In addition, we are grateful that Mr. Pompeo chose to travel to the Golan Heights, thereby making history as the first U.S. Secretary of State to do so and reinforcing the Trump administration’s position concerning the critical role that the region plays in ensuring Israel’s ability to protect itself from the existential threats posed from Syria, Hezbollah, and Iran.